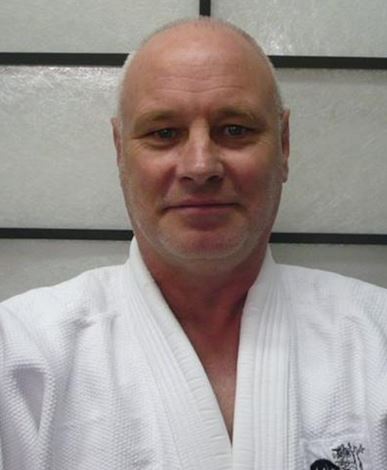 Another influential instructor at the International Judo College was John Boniface. When John returned from martial arts studies under Sugawara Gesshu (10th dan) at Kokushikan University in Japan and established Fuji Ryu Goshindo in New Zealand, James trained under him and Paul Reti, gaining his 1st dan in 1980. James opened the first permanent Fuji Ryu Goshindo dojo in 1979 in the Bromley School Scout Den, which was named Furui Ryu Eda.

When John Boniface died in 1992, James and his most senior student Alistair Thompson resigned from Fuji Ryu Goshindo and founded their own organization Sakura Kan Ju Jitsu. James was graded by Grandmaster Steve Heremia, 10th Dan Black Dragon Jiu Jitsu, to Nanadan in 2012, and Hachidan in 2020.

The influence of James as a key figure in Fuji Ryu’s history, as the founder of Sakura Kan Ju Jitsu, and on New Zealand Ju-Jitsu cannot be underestimated. He was one of the first second-generation of Fuji Ryu members to be graded to black belt in New Zealand and he has led the Sakura Kan Ju Jitsu organisation for nearly three decades, which operates 6 clubs around New Zealand and 1 in Australia. James was inducted into the New Zealand Martial Arts Hall Of Fame (NZMAHOF) on 7th September 2009 and inducted into the Australasian Martial Arts Hall Of Fame (AMAHOF) and the World Karate Union Hall Of Fame (WKUHOF) in 2013 in the category of Life Time Achievement.

James Salter has made a lasting impression on Ju-Jitsu in New Zealand and is considered the “grandfather” of Corrections based Control and Restraint techniques in New Zealand, operating as a Master Trainer in Use of Force and Control and Restraint for the Department of Corrections until his retirement . His own Ju Jitsu career has spanned over five decades, and seven martial arts clubs can trace their teaching back to the Ju-Jitsu style that James founded as the New Zealand head of Sakura Kan Ju Jitsu.