Henk Fekkes began training in judo and ju-jitsu in the Netherlands in 1953.  His instructor was Jaap Nauwelaerts d’Agé (later 9th dan) who was a student of Mikonosuke Kawaishi.   In 1955 Henk gained his black belts in both judo and ju-jitsu and opened his own martial arts school in Leeuwarden, a city in northern Netherlands before moving to New Zealand in 1959.

Henk settled in Christchurch and began teaching physical education at Papanui High School.  He became involved at the Crichton Cobbers Club where he taught judo and ju-jitsu, producing such notables as Frank Best (Australian Open judo champion) and Des Bryson.  From 1962 he taught twice-weekly at the Christchurch YMCA.  In 1972 he was graded to 3rd dan  by Geshu Ichijyoan (9th dan) which allowed him to grade his own students to black belt.  Two such students were John Boniface (Fuji Ryu Goshindo) and James Salter (Sakura Kan Jiu Jitsu).

From 1994 Henk taught at the Cranford Street Gym and produced a televised self defence programme with Frank Best. In 2002 the two began their own martial arts school which included special classes for the over-40s. Henk retired in 2005 but retains an active interest in the club and in the ju-jitsu community.  His involvement over five decades has been lasting and today eight martial arts clubs can trace their teaching back to the ju-jitsu style that Henk introduced to New Zealand. 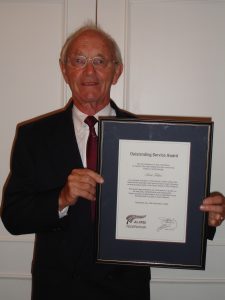