David Butler’s introduction to ju-jitsu was in 1969 at Ivan Gale’s Pukekohe Jiu Jitsu Club.  Ivan was the fourth black belt graded by Hans van Ess, the pioneer of Kawaishi ju-jitsu in the North Island.  Dave became the New Zealand Jiu Jitsu Association’s youngest black belt when he was graded to shodan (1st degree) in 1978. Soon after, Dave left for Australia where he spent a year studying judo and ju-jitsu with the Australian Society of Ju-Jitsuans.  On his return in 1979, Dave opened his first club at Mt Albert, Auckland, which he called Bushido Ju-Jutsu Kai.

In 1984, Dave travelled to Canada to train with Ron Yamanaka, a member of Jiu Jitsu International.  That meeting led to a further trip in 1987 to Europe, which included a visit with Richard Morris, founder of Jiu Jitsu International.  Thereafter, Dave travelled to JJI and World Kobudo Federation conferences throughout the 1990s, often taking groups from the Bushido club.  At the time, Dave also met the likes of Wally Jay, Dan Inosanto and Toshishiro Obata in the USA and Shizuya Sato in Japan.  This resulted in Dave studying and gaining grades batto-jutsu, bo-jutsu and aiki-jutsu under Obata and Nippon Goshin Ju-Jutsu under Sato.  It also led to his organisation being renamed NZ Aiki-Bu-Jutsu Federation and then Samurai Arts.

As well as travelling, Dave brought world-renowned martial artists such as Alain Sailly and Pascal Stoupy (JJI), Robert Clarke, Giacomo Bertoletti and Tony Siong (WJJF), and Obata to New Zealand.  These visits provided exposure for New Zealanders to highly-graded, international ju-jitsuka.  Throughout the years, Dave maintained contact with Richard Morris, receiving his nanadan (7th degree) from JJI in 2011.  He also received the menkyo title of kyoshi from both Obata and JJI, and is the only New Zealand ju-jitsuka to hold such a title.  One of the leading kodansha in this country, Dave’s ju-jitsu career has spanned four decades and resulted in the development of ten black belts of his own training. 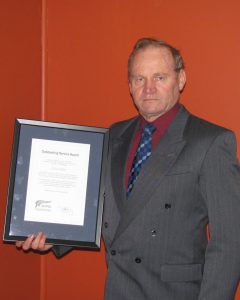