Kawaishi Nihon Goshin Jutsu is the form of jiu jitsu taught in Europe by Mikonosuke Kawaishi from 1928 until his death in 1969.  Kawaishi attended Waseda University in Japan where he trained in judo and kendo.  One influential instructor was Kurihara Tamio (posthumous 10th Dan), a student of Isogai Hajime (10th Dan), who trained under the founder of Kodokan judo, Jigoro Kano.  Kawaishi was graded by the Kodokan to 4th Dan judo in 1924, shortly before he leftJapan.  He also trained in jiu jitsu under Yoshida Kotaro, a master of the Daito Ryu and Yanagi Ryu styles.  Kawaishi jiu jitsu therefore places much influence on throwing and groundfighting techniques.  It is less circular than Daito Ryu aikijujutsu but has many joint locking techniques in common.

In 1998 NZJJS adopted the Olivecrona Method of Kawaishi jiu jitsu.  Stenfinn Olivecrona was a student of the Kawaishi system who had adapted his jiu jitsu to his work in the security industry.  Techniques are classed roughly into out-fighting, in-fighting and groundfighting, with an emphasis on close-contact clinch fighting.  Sten’s method of teaching is quite different from the common technique-based instruction found in most martial arts dojo.  Delivery is principles-based, which allows the student to learn to fight in a fluent and individualised manner.  A large portion of classes is dedicated to free-practice to allow students to hone their fighting skills.

Children are taught judo until they move into the senior class.  The emphasis is on learning good breakfalling, throwing and groundfighting techniques, often using fun judo games.  Strikes, jointlocks and strangulations are not taught.  Techniques are grouped together and kids are rewarded as each group is mastered.

Self defence jiu jitsu is predominantly taught in the senior class.  The first grade covers basic fighting with an emphasis on good positioning, and striking in those positions.  The second grade covers more of the principles of grappling, both standing and on the ground.  By black belt the student should have an adaptable, personalised fighting style that utilises a good number of striking, grappling, throwing, jointlocking, strangulation and pinning techniques delivered both empty handed and with weapons.

Sport variations are taught for those interested in sport ju-jitsu competition.  Doug and Jack are former New Zealandrepresentatives at World Games level, and Doug, Dennis and Jack are all experienced sport ju-jitsu referees.  In all, seven NZJJS(HB) members have represented New Zealand, winning four golds, three silvers and one bronze. 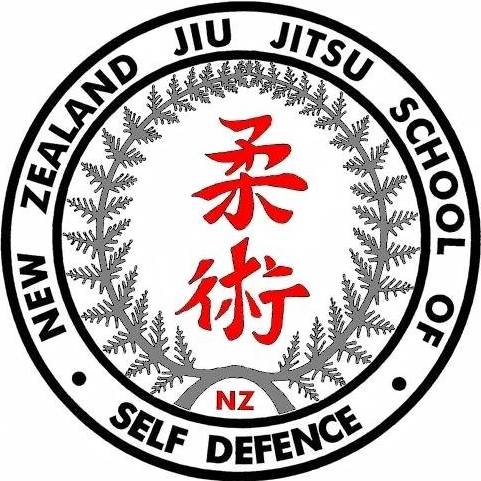